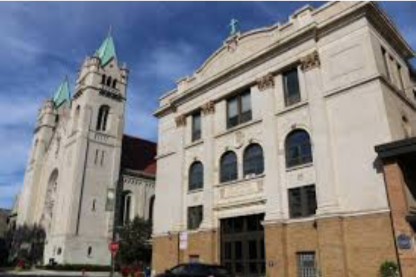 A Welcoming Community for Over 130 Years

Established in 1884, St. Josaphat School has always addressed the needs of its students.  The Sisters of Charity of the Incarnate Word opened the school with 337 students. The following year, the Sisters of the Holy Family of Nazareth Congregation took over, and they continued to lead St. Josaphat School for the next 98 years.  In its earliest years, the school was also an orphanage, caring for up to 80 children at a time.

As the student enrollment of St. Josaphat School has changed, so have the school facilities.  The school began as a part of the church building on the northwest corner of Belden and Wayne.  By 1913, over 1,000 students attended St. Josaphat School, and so a new school building was constructed on the southeast corner of Belden and Southport.  At the height of enrollment, the student population reached 1,112 students in 1925 with 15 nuns on faculty. Over the next decades, an annex to the school was completed to accommodate the large student body.  However, St. Josaphat School experienced declining enrollments in the second half of the 1900s, and by 1986, the school had just over 100 students and was using just five classrooms.

The school has adapted to the growing and changing neighborhood. School enrollment has increased significantly, and the facilities have been updated with additions and renovations of classroom space.  These included new classrooms at several grade levels, a science lab, updated bathrooms, and a new STEM lab.

There is a feeling of community and sense of opportunity that pervade our school.  St. Josaphat School graduates not only attend the best high schools in Chicago, but they leave our school prepared to meet a lifetime of challenges as future leaders.